FREE SHIPPING ON ORDERS OVER $45! Dismiss

The term “DIY Electricians” makes about as much sense as a “ketchup popsicle”. But learning how to hang affordable and awesome lighting without paying a fortune or burning down the house? Hey, sign me up! I’ll even bring the ice trays and the ketchup! 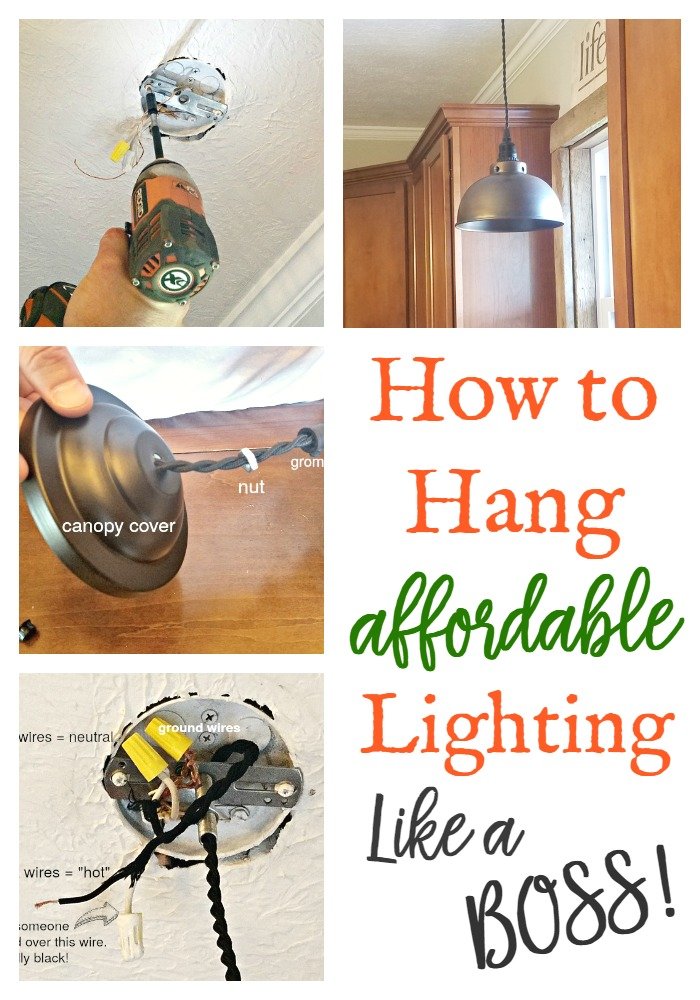 Today we were DIY Electricians. And we survived to tell the story. We replaced a not so favorite pendant light over the kitchen sink with an affordable and stylish aged copper light. We did it in 6 easy steps, and it actually lights up! 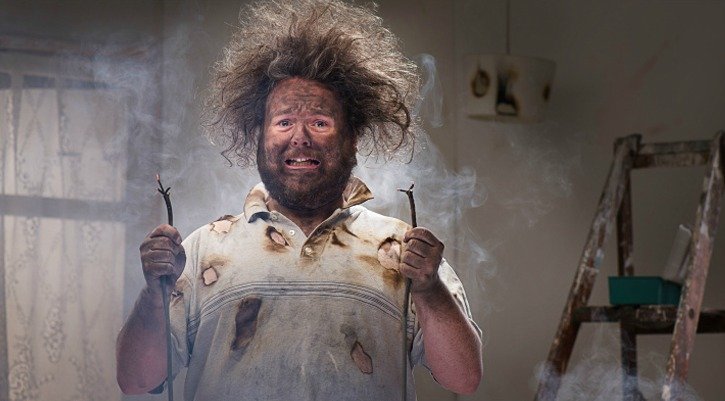 Since we don’t condone this sort of reckless behavior, we will put a disclaimer here.  Unless you are confident in your DIY abilities and have a fire extinguisher within arms reach, we recommend using a licensed electrician for all of your electrical home improvement projects.  This is merely a story of how we became renovation rebels in a matter of hours. Do not try this at home.

Here’s the 6 easy steps and a whole lotta pictures we took to hang an awesome pendant light like a BOSS.

First of all, turn off the power! The most important part of this whole adventure is turning off the power at the breaker box for the light you are replacing. Do this first every time.

We removed the canopy of the old light, unscrewed the wire nuts by turning them counterclockwise, and separated the wires so nothing got crossed up. A few loose screws is one thing, but getting your wires crossed can cause some major issues. 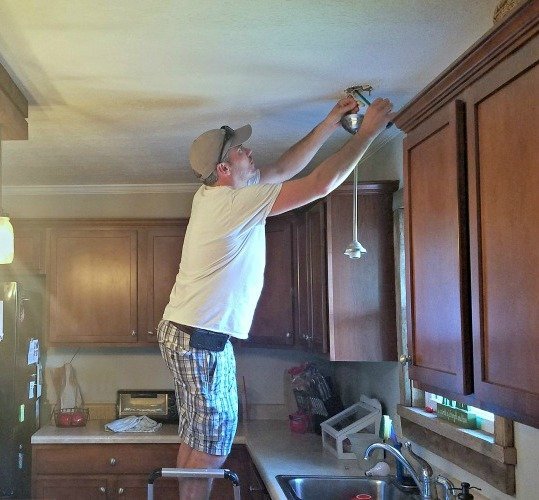 Once we removed the old light fixture, we were left with what you see here. A shallow electrical junction box and three wires. This shallow box poses a small challenge for us later on, but nothing that these DIY rebels can’t handle. For now we’ve put the wire nuts back on the end of the exposed black and white wires. Safety first!! 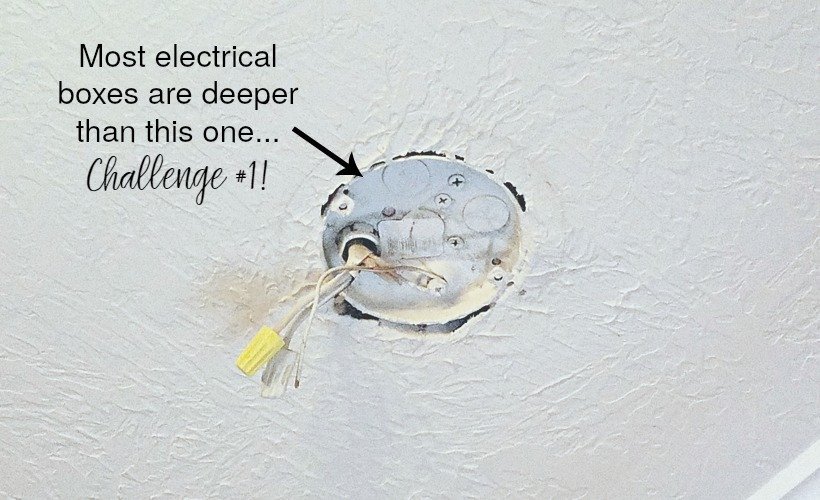 Now it’s time to cut the cord to length for the new light. I love this new pendant light comes with a plug end, but since we were installing this in the kitchen, we had to convert it a hard-wired pendant light. We decided on the length we wanted to light to hang, and added about 6 inches to it. This way we had enough slack for connecting the wires. 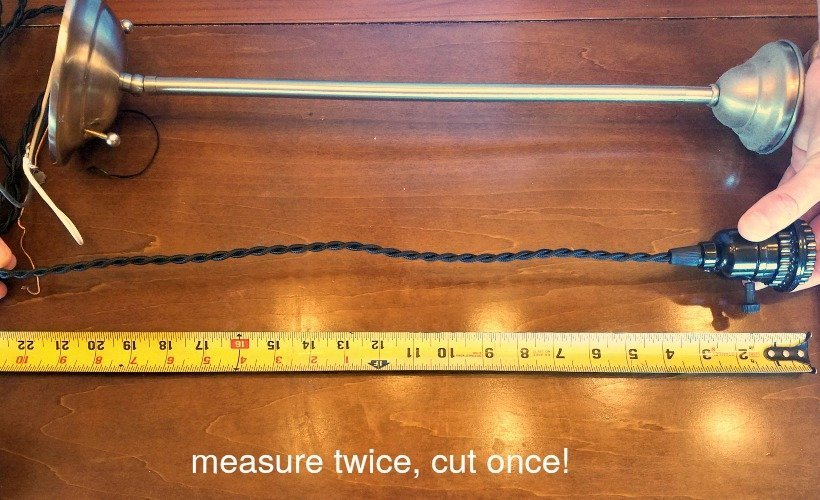 This pendant light has a unique cloth-covered twisted cord. We used the wire cutters/strippers to cut through the wire and strip back the ends about a 1/2 inch to uncover the bare wire. 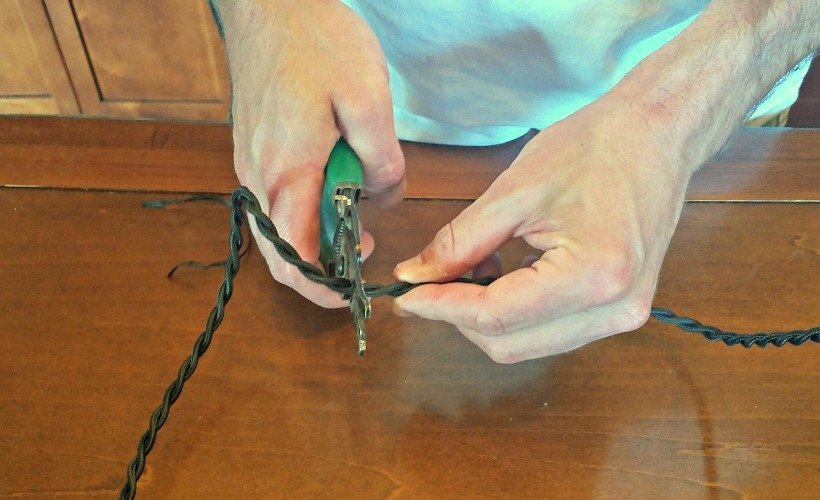 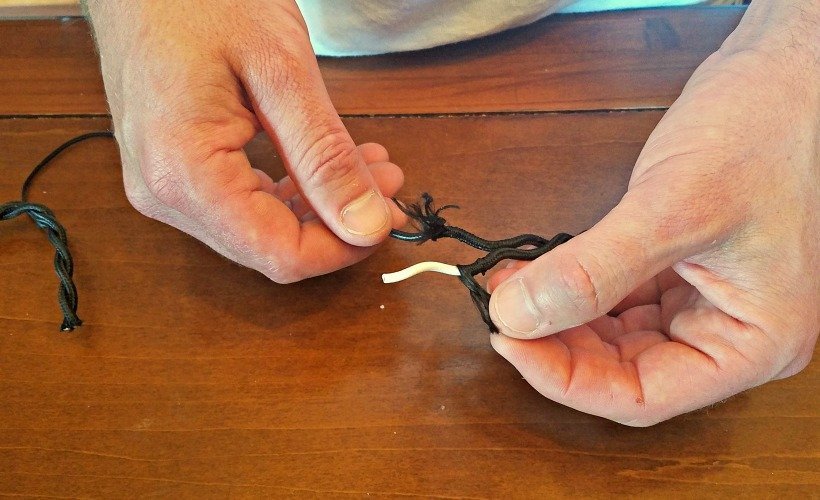 The pendant light came with a canopy kit to use for hard-wiring our light. The canopy kit includes everything you see here. We are going to remove the silver crossbar mounting bracket across the middle. 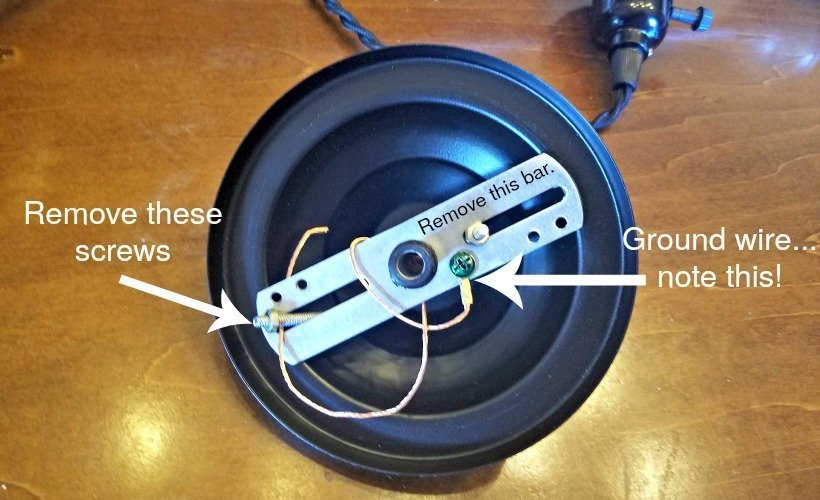 We will install that same mounting bracket in our electrical box in the ceiling. Our electrical box already had this bracket from the old light, but we are replacing it to insure it fits with this canopy cover. 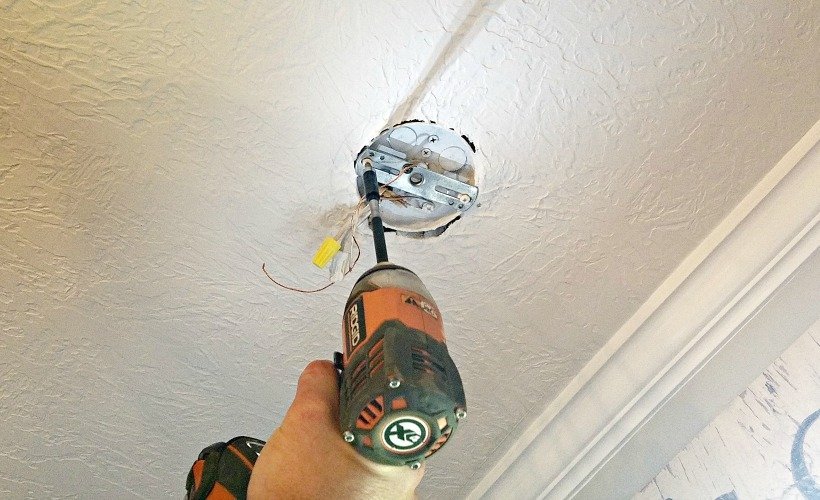 Once we cut the wires on our pendant cord, it’s time to thread it through the canopy components. Thread the wire through this long screw (called the nipple) which will go in the middle of the silver crossbar bracket we will install in the ceiling. 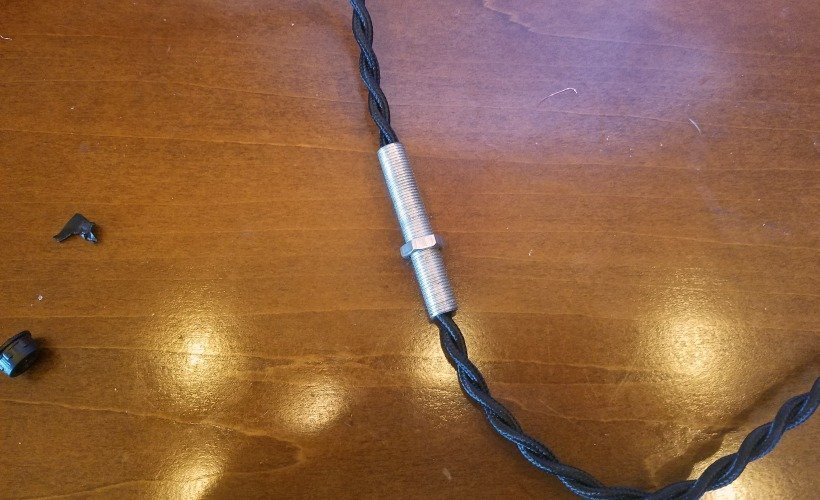 The canopy kit consists of the canopy cover, the silver cross bar mounting bracket, the nipple, two lock nuts, and a grommet with the set screw. We are going to thread our new pendant light cord through the canopy as shown here. 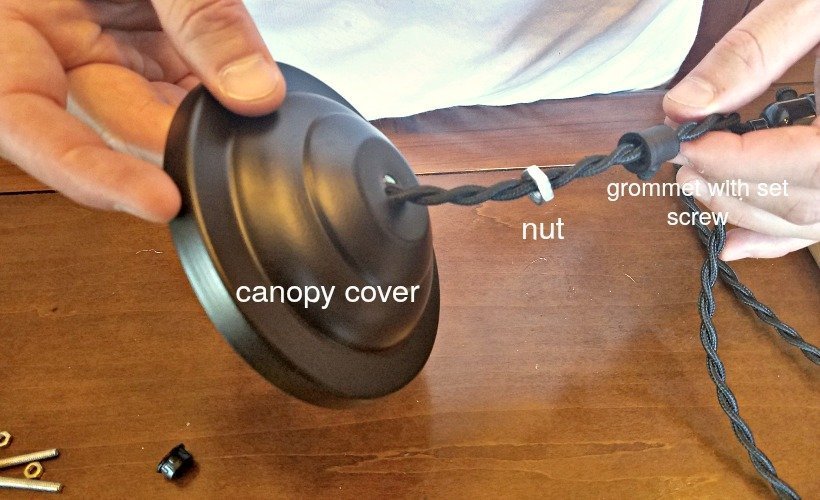 Since the wires are covered in cloth, we used some electrical tape around the ends of the exposed wires to keep the frayed ends neat and stop any further fraying. Now we are ready to install! 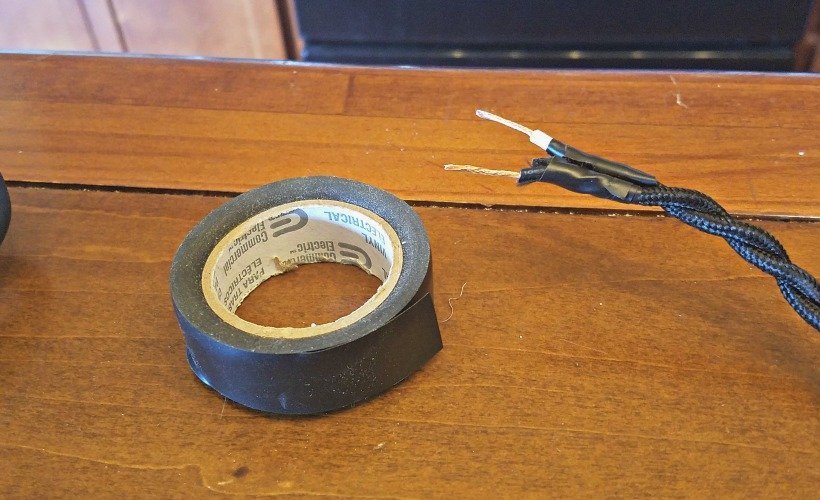 4. Connecting all The Wires

We’re going to thread the nipple of the canopy kit through the crossbar in the junction box. We’re going to bend all the wires down so we can work with them and get them all connected. Let’s separate the wires and pull them in opposite directions so nothing gets crossed up. 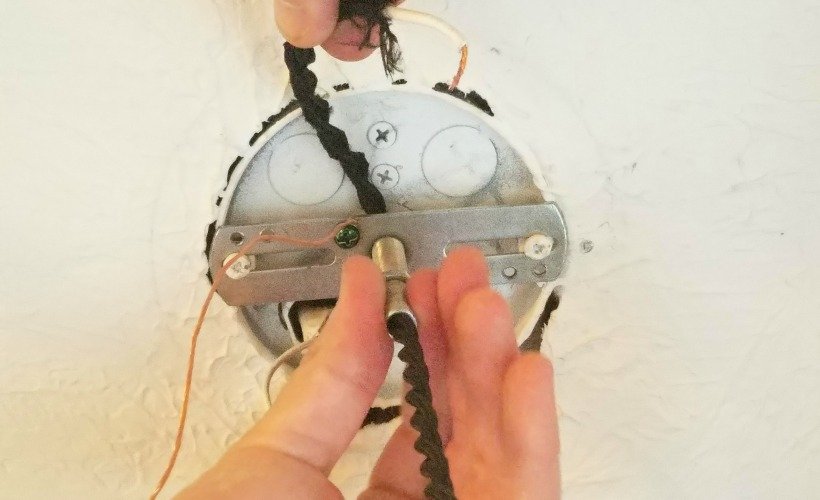 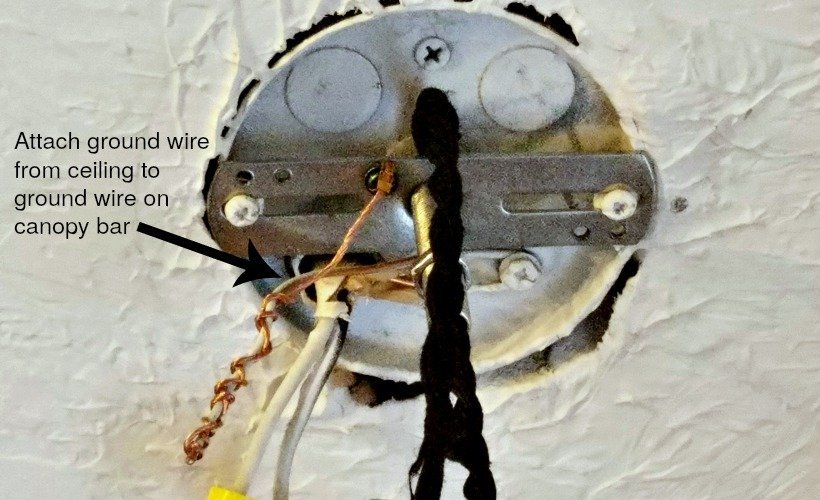 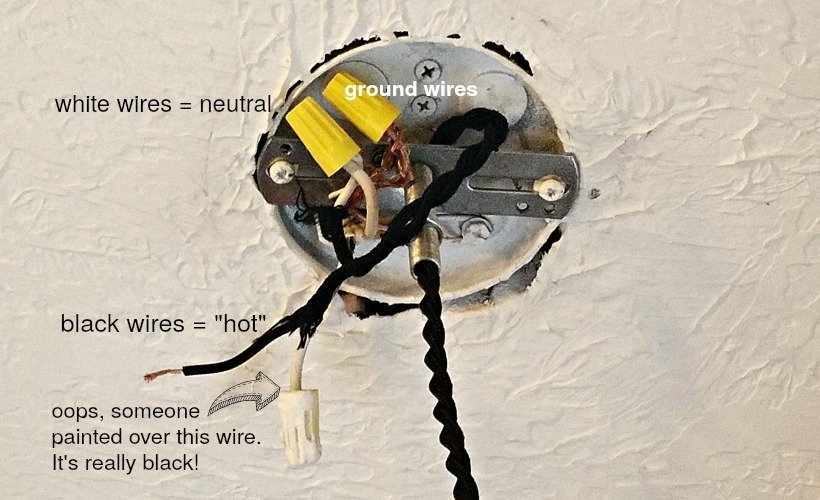 Remember that fire extinguisher I mentioned? Yeah, remember we don’t want any crossed wires here. White to white wire, black to black wire. Now, you might have a red wire instead of black. Or, you might have clear wires and you can see how to wire those here where I installed a different DIY pendant light in my daughters reading nook. 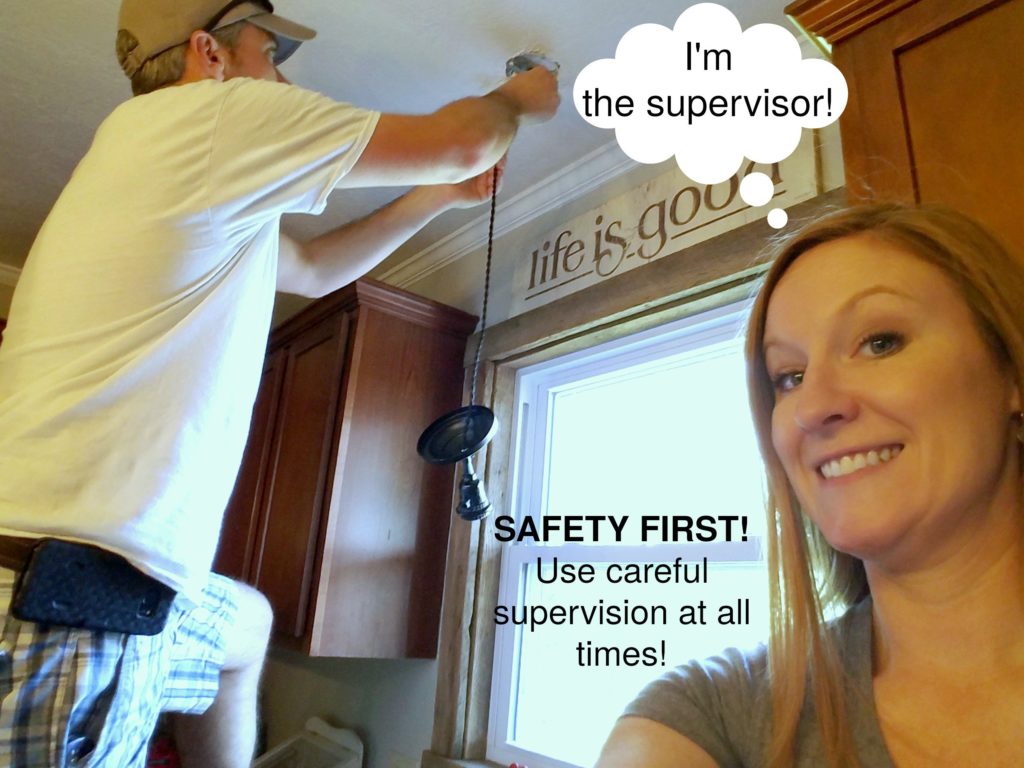 Carefully tuck all the wires back into the junction box. 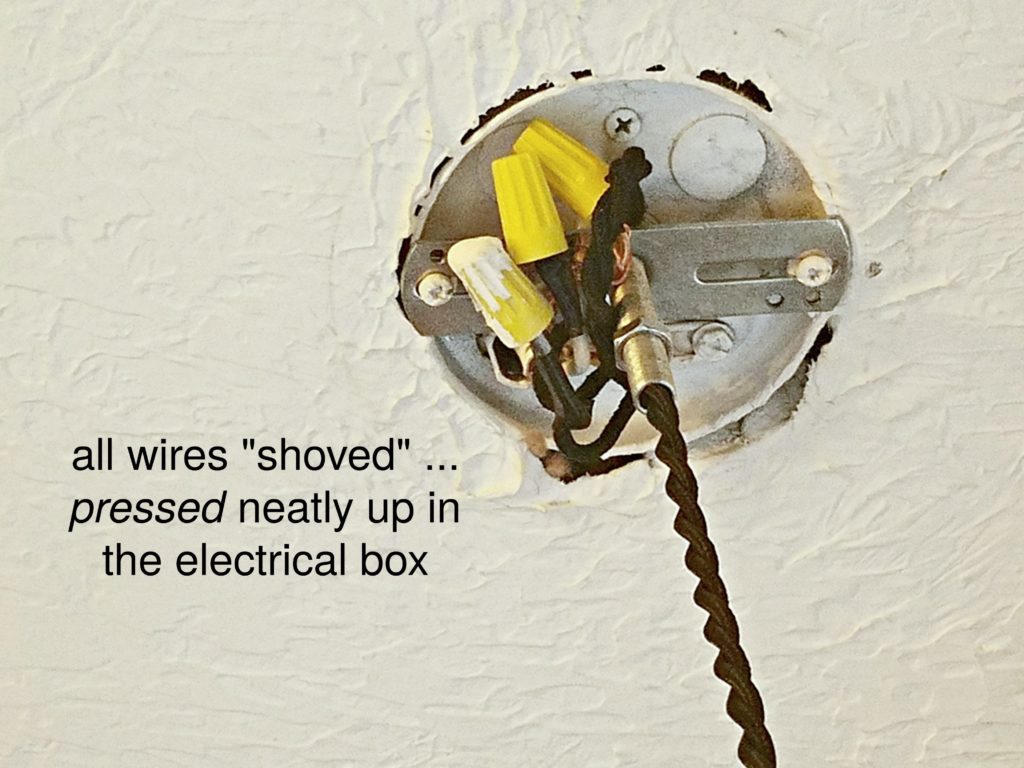 Raise the canopy to the ceiling and secure it with the collar nut. See that exposed thread? That’s because we have a shallow junction box. THAT is the minor challenge we faced when installing our light fixture. An easy way to fix this is to just paint over the threads with some matching paint and you’ll hardly ever notice the difference. 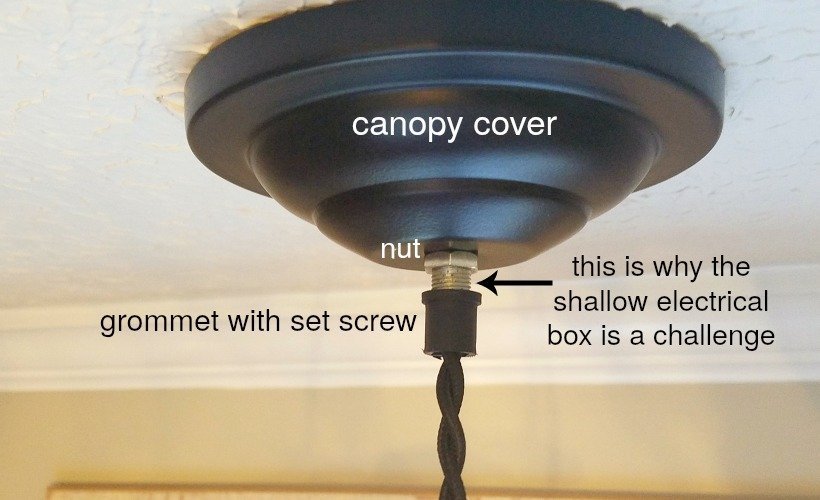 Be sure to tighten the set screw on the grommet to hold it all together. 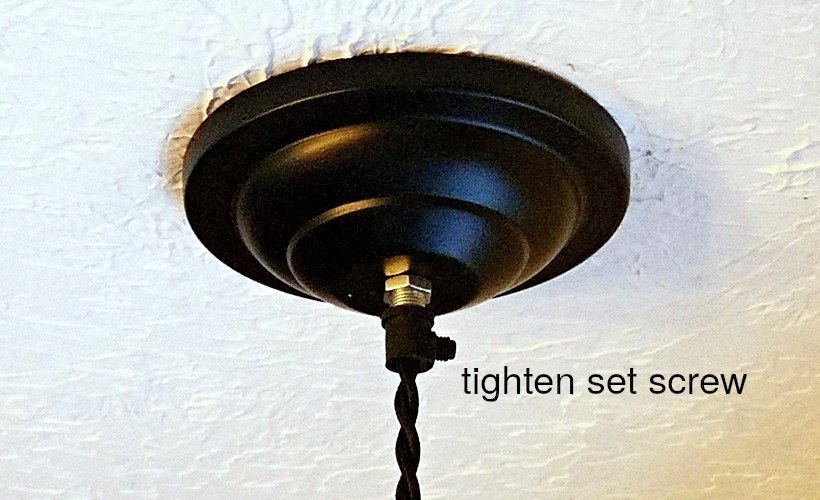 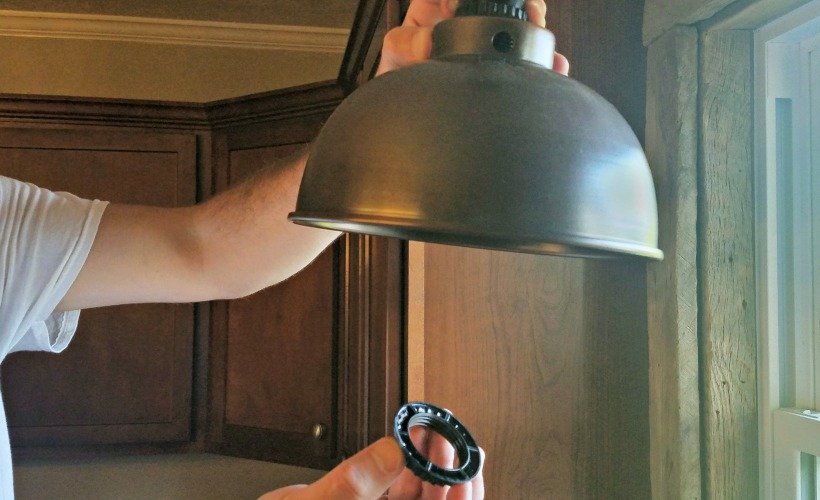 6. How many rebels does it take to screw in a light bulb?

Make sure you head back to your breaker box and flip the circuit to the on position. Install your favorite light bulb and flip the switch. Cross your fingers, not your wires and let there be light!! 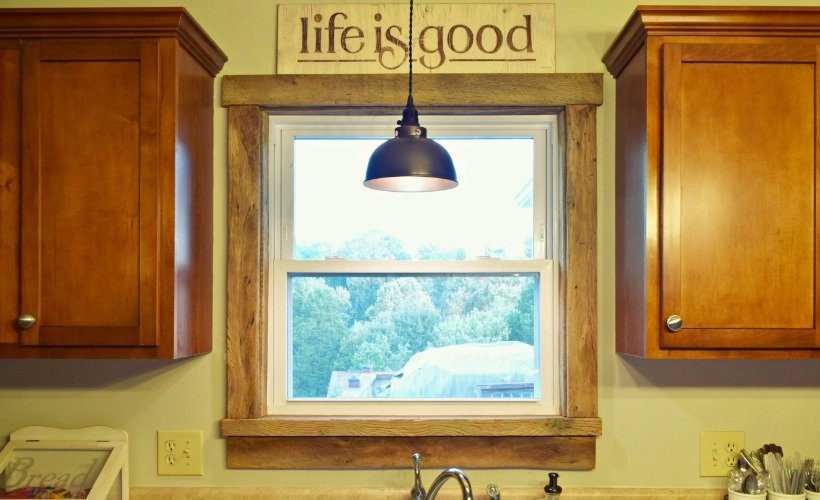 Now, if you’re light doesn’t come on,  it could be that the wires aren’t connected well at the ceiling. Just double-check all your connections, but be sure to turn the breaker back off before adjusting any wires. If all else fails, throw in the towel and the screwdriver and call an electrician!

Our pendant light came with a 15′ 1/2″ foot long cord which still has a plug at the end.We only used about 3 feet of this cord, so we are going to package this baby up and save it for a future DIY project. Because being DIY Electricians is what we do here! 🙂 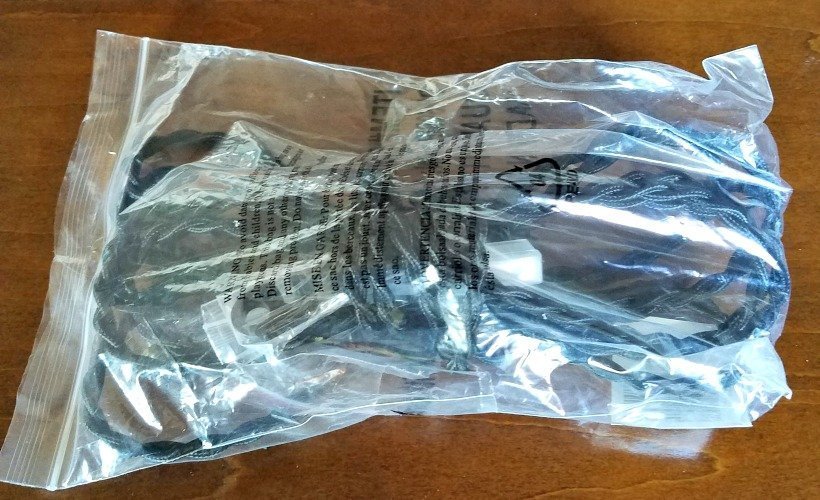 If you like our aged copper pendant light, you can find it here. It comes with or without the canopy kit in case you want to use the included hanging hooks and just plug it in. And just for following along on our adventures in electrical home improvement, you can get 20% OFF all lighting in our shop. Just use coupon code: DIYLIT20 at checkout.

Thanks for visiting and I’m going to get busy on some more ketchup popsicle.  🙂

Is an In-Home Steam Shower Worth the Money?

If you ask us, is it worth the money? Yes. It is worth every penny and every bit of grit it takes to install one.... Continue reading

From breadboxes to rustic ladders, we are slowly adding rustic / vintage inspired and farmhouse decor to our new home. Despite my urge to tackle every room... Continue reading

Hey friends! So I’m totally jumping on board with the farmhouse decor and decided to create a farmhouse breadbox with my new Silhouette Etching Vinyl.... Continue reading

Barnwood baseball wall decor that's simple and inexpensive to make. We made this from some reclaimed barnwood, but you can make this out of any... Continue reading

Hey friends! I'm back in the ring again. Yes, I took a couple of weeks off for some much needed time to myself. The first... Continue reading

This site uses Akismet to reduce spam. Learn how your comment data is processed.